You are here: Home / Archives for Accountability 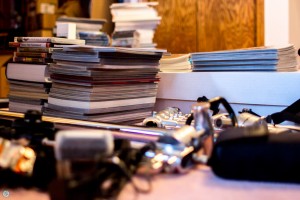 In my last entry, I explained that I quit my job, I’m going to Malaysia for three months, I have no job there, and that I wasn’t crazy.

It doesn’t mean I’m without a plan.

The beginnings of an idea.

Since my mid-20’s, I’ve always wanted to live anywhere I please, go anywhere I want, and pretty much work from anywhere I want. What I didn’t realize is that this wasn’t some nutty notion I had – other people had the same thoughts as I did. In fact, other people are actually living that dream!

I got a taste of that when I discovered Ramit Sethi and Tim Ferriss, almost by accident. Ramit, and to a lesser degree, Tim, got me to change the way I thought and take action in my life. Thanks to some of the online courses I purchased from Ramit, I learned about the power of hacking your inner psychology and taking action on achieving a New Rich life. I improved many of my soft skills; this was probably the hugest benefit, because I never realized how little I really knew about how to think, communicate, and convey myself.

The two courses, Success Triggers and How To Talk To Anybody, kicked my butt into gear about how to improve and represent the best parts of myself to a ridiculous degree. In fact, this blog is a testament to that, because I used to be very uncomfortable about opening myself up to others and showing my vulnerability, whether online or offline. Going further, Earn1K helped me to earn $1000 a month. I’m currently tackling Zero To Launch (ZTL), and it’s absolutely eye-opening.

But how does that help me now? I’m actually nowhere near finishing it, since ZTL is more of a long-term ideal. I needed a quick solution.

After my research on travel hacking, I stumbled across Location 180 (L180). It was refreshing to see somebody living the life I wanted. Traveling anywhere he wanted and earning income abroad, Sean Ogle was kicking ass and taking names, and he has built himself an amazing community through Location Rebel (LR).

I should know, I bought the course.

The job I quit last week was my first professional foray into copywriting. I learned a lot during my 8 months there, and I know more than ever that I want to be a professional writer. Pro writers are always in demand. They are the foundation for nearly any creative idea. They are at the heart of your marketing campaign. Most of all, I’ve been writing since I was a child and have been cultivating different areas of the written word for years.

When LR promised a decent earning through SEO writing with the freedom to work from anywhere I wanted in the world, Sean called it location independence and I nearly bounced in my chair with glee. Picture that for a moment. It’s kinda weird, right? Okay, moving on.

The map that leads to freedom.

Now that my burning desire had a name (and a logical one, at that), I knew I was on the right path.

Sean and his highly successful community of students in the course offered up blueprints and maps of the choices they made to get to where they are now.

I did some quick calculations based on several LR top performers’ results – many of them were able to achieve monetary results in one month, even while working part-time.

Several months ago, I had mentioned to my employers that I was planning to leave in December. The timeline seemed doable.

When I also came across one of Sean’s L180 articles about earning your first dollar online, I noticed the point of selling your stuff. I have tons of things I no longer need with which I could probably make a decent amount of money. Also, living a zen life with few belongings might actually be a good thing.

I’m also working on my final paid film project. When it’s over, I’ll get paid some more funds from my contract.

The LR community and sites like Upwork would provide the remaining income I’d need through SEO and copywriting. Once my stuff is sold and my film project is over, I can tune up the amount of writing work as needed while I shift my part-time efforts to ZTL and other long-term ventures to increase my multiple income streams.

No matter how I proceed, the overall goal is to achieve location independence and say goodbye to the daily grind of employment.

As a result, I fast-tracked my timeline by booking my flights to Malaysia for the end of November and put in my notice in mid-October. Three weeks later, here I am!

This is my action step for this week, and I offer it as a challenge to you as well. Generate income using any of the methods I described above. Whether it’s through selling personal stuff, doing work on the side, or a combination of the two. Don’t just study or research how to do it – use that information and get paid by the end of the week.

Don’t have time? Maybe you don’t want it as much as you think. Reevaluate your personal goals and identify why you would want to do this.